-Sorry, no photos, these computers don't allow it sadly.
Yes, yes, another week truly has flown by, and we all know it. Ha. Sometimes I don't even see the weeks. They all are mixed together, since we are normally doing the same thing each day. I got a package this week as well from Rachel, so that was cool. We did have a Zone conference with a couple of the zones, and President asked me to conduct the meeting. It all went really well, and we had some really great trainings. Also, durring the week we did some divisions. I stayed in Alphaville with Elder Vincent, and we had a good time, and it was a good day for us. We even had chips and salsa at the end of the day. He is a great missionary. I also went on another with Elder Engberson where we went to his area. He is a good missionary, and he jumped on a tramp for the first time, on a tramp a member had. It was funny. We showed up at a members house, and said, hey, what are you up to, and he said nothing, so we invited him to come with us, and it went really well. I also found a store that is called iPlace when we were walking the other day, and it is all apple stuff, and it looked sweet. Ha. A lot of people have iPads here, and several even have Macs. Go Mac! Ha. Anyways, this week has been a good week, and we are working with Julia, several members of her family are already baptised, and it went really well. We also are trying to work with Roberto, the father of several recent converts, and prayers for him are always good. We are trying to work with several references as well, and hopefully that will turn out well. There was a scripture that President used in his training, that is in Doctrine and Covenants 76:5. The Lord is happy and honors us when we do what is right. Its not that we are avoiding the punishment, its that we can also gain the reward. We should keep the commandments because we want to, not because we need to. The Lord loves us all, and wants us to be happy. We can only truly be happy through the Gospel of Jesus Christ. There is nothing better to make us happier and strengthen our family than the Gospel of Jesus Christ. I love you all and hope you all have a great week.

PS: It has been pretty cold here, but its more because I'm used to the heat. I still wear my short sleeve shirt normally. The Chapels here are different than the states, but not too much. They are Brazilian style. They still do have white steeples ... and they all are earth tones, just not the usual brick type we have. As for baptismal fonts, they normally are in every chapel, and not just the stake center. Every area I passed through has had one, and I'm pretty sure its a lot more common than not here.

Posted by Elder Paxman at 11:57 AM No comments: 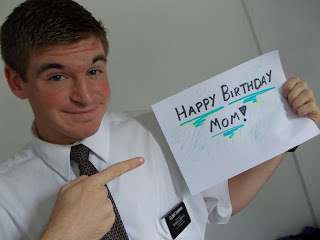 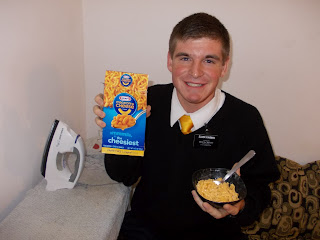 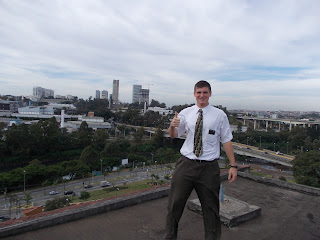 Above our apartment building!  Yay!
So, I am already out of time basically. Sorry. First off, HAPPY BIRTHDAY MOM! I love you Mom, and hope that you are having a great day. Also, Happy Fathers Day Dad! I love you Dad. This week was another fast week in my life. As always. Ha. Its been a normal week of visiting people and teaching them. We have been trying to find new people, and the man that showed up at church on Sunday, we went and taught him. Samuel is his name. He will be travelling a lot in the near future, but he was greatly interested. He has been a part of the "Congregação Cristão No Brazil" for all his life, but he was interested and drawn to the church. We weren't able to visit Gisele and Marcello this week, but we will this coming week. And as for wiring showers, It wasn't a complicated wiring, ha, just a quick fix up. Nothing to worry about either, all is done. Ha. Sorry that my time is short, but I would like to leave you with a scripture in 1 Thessalonians 5:16. It is very simple, but its something that we should all seek. We truly do have many reasons to be joyful, and to rejoice. I love you all, and hope you all have a great week.


PS: I do miss a good american BBQ. Ha. As for our food here, everyday we eat with the members, or on some occasions we get money from them. But here, we eat Almoço, or Lunch, with them. Only on P-day we make our own stuff, or sometimes for a dinner at night. Our apartment is a two bedroom apartment with two bathrooms, a "big room" and a kitchen with a side "Laundry room." Its all tile, and its not bad at all. As for the boyfriend girlfriend day, its basically our valentines day, but its only among those that are dating or married. Its not the "everyone gets candy" kind of thing.
Posted by Elder Paxman at 8:23 PM No comments:

Sorry, fotos aren't working.  Better internet = no photos??
So, yes indeed, its been a week. So during the baptism in English that I conducted, my companion stayed there, with the other Brazilians that watched, and they understood all that they could. And as for Elder Cacchiotti, he is from Moses Lake Washington. He is a great guy. I got the Paxman Times, which was awesome. I love looking at the pictures and getting a good laugh through all the updates and things. So this week, we had a Mission Counsel with President and all the other Zone leaders. That went excellent. Also, the Wards, from our ward, gave us some Mac N Cheese, which was delicious. That was a great taste that I hadn't had for quite some time. Sister Ward went to the states for the summer now, and there are a bunch of people that are going to the states throughout the year. It is freezing here by the way ...  well for Brazil ... and after you're use to the heat. There is a family here, Familia Fusco, which they are always helping out us missionaries. They have an amazing spirit of missionary work. They brought us all snacks when there were a bunch of us stuck at the church without Almoço. (lunch, kind of, ha). We were able to watch the dedication of the Manaos Temple. The cultural part was pretty cool and enjoyable. Ha. We watched all three sessions of the dedication, and it was cool. We saw another side of President Deiter F. Uchtdorf when they went to put the mortar on the temple. He is a funny guy. It was a cool experience though. So, this week the work is pretty normal, we taught a couple that are interested, they were a reference of the Fusco's. There names are Gisele, and Marcello, and they are pretty cool. We are still working with a couple people, and area always praying for more. The scripture that I would like to share with you all today, is Moroni 1: 2-4. I am always amazed at his testimony, and we all should be standing up for the right and for Christ. And he also shows his love for his brethren. The very people that were trying to kill him, he wanted them to be able to have the joy of the gospel. Let us all strive to be better people, and better livers of the gospel in everyday. I love you all, and hope that you all have a great week.

PS: As for showers and bathrooms and things; our shower caught on fire while my companion was taking a shower. They are electric, and I guess the connection was bad. He came running out holding his towel, and I looked in the bathroom and there was a bunch of smoke. Nothing big though. It didn't even burn long, just melted the wires where they connected. We fixed it the same day though, so it was all good. I connected them a lot better this time. I hope, ha.
Posted by Elder Paxman at 8:42 AM No comments: 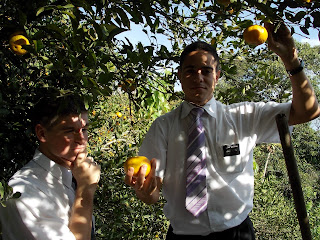 Oranges! Yay! They were real good right off the tree. 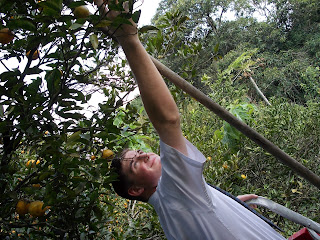 I'm gonna eat that Orange! Well ... maybe it was just for a foto, but oh well. I did eat other ones. Ha.
I am yet again surprised at how fast a week can go. Can you believe it? It took one week to pass. Ha. But it was indeed fast for me. This past week was a good week. We had a division where I stayed in my area with Elder Cacchiotti. He is from Washington actually, and he is pretty awesome.  We had a good time. We also had a surprise meeting called by president which went well really well. He truly is an inspired man. A member here in our ward has his dad´s autobiography, and I got to read a little about President Martins there too. Also, this week was our stake conference, which actually was a regional conference that was broadcast from Salt Lake City. We got to hear from the Prophet, Thomas S. Monson, and also Elder Neil L. Anderson who spoke to us in Portuguese. There also was a seventy, and Sister Elaine S. Dalton. It was a really great meeting. And afterwards, on Sunday afternoon, there was a baptism of a boy, Payton, who just turned 8. He is from the Rodgerson Family, who are from the states. Several other American families were there as well, and they asked me to conduct the baptismal service in English. That was super crazy. Its really weird to speak English, but cool too. We taught a daughter of a recent convert, her name is Juliana, and she seems to be truly interested. She went to church as well, and enjoyed it. She is part of the Family of Vera, whose son in Gabriel, who was baptised recently as well. And as for Vanda, she didn't end up coming to church, and we will go there and talk to her this week. When we are on the right path, Satan always tries to draw us away. It may be in attractions, difficulties, or many ways, but always remember that the Lord will help us, for he loves us all. In Alma 57:26-27, it talks of the stripling warriors, and how they were preserved by the Lord. We should build our Faith in the Lord, and don't doubt. Yet again, we need to trust Him. The Lord knows what is best, and he will help us to conquer our "enemies" and be preserved. I love you all and have a great week.

PS: As for where we live, normally we live in a house, or an appartment. Normally there is only one companionship in each house, though there are rare exceptions. Right now, I live in an appartment with my companion, right next to a smelly river (supposedly the smelliest river in Brazil). It's good though. As for Holidays, the Girlfriend/Boyfriend day (our Valentines Day), is coming up on the 12th of June, and afterwards it is Festa Junina - the June festival which I went to last year as well.

"Trust in the Lord with all thine heart; and lean not unto thine own understanding. In all thy ways acknowledge him, and he shall direct thy paths." 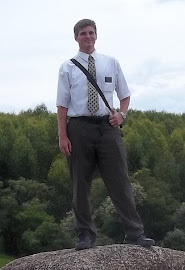 Elder Paxman
I am on a Mission for the Church of Jesus Christ of Latter-day Saints in the Brazil Sao Paulo North Mission.